As per the Toronto Regional Real Estate Board TRREB’s March 2022 Market Watch Report:

“Competition between home buyers in the GTA remains very strong in most neighbourhoods and market segments. However, we did experience more balance in the first quarter of 2022 compared to last year. If this trend continues, it is possible that the pace of price growth could moderate as we move through the year,” said TRREB Chief Market Analyst Jason Mercer. 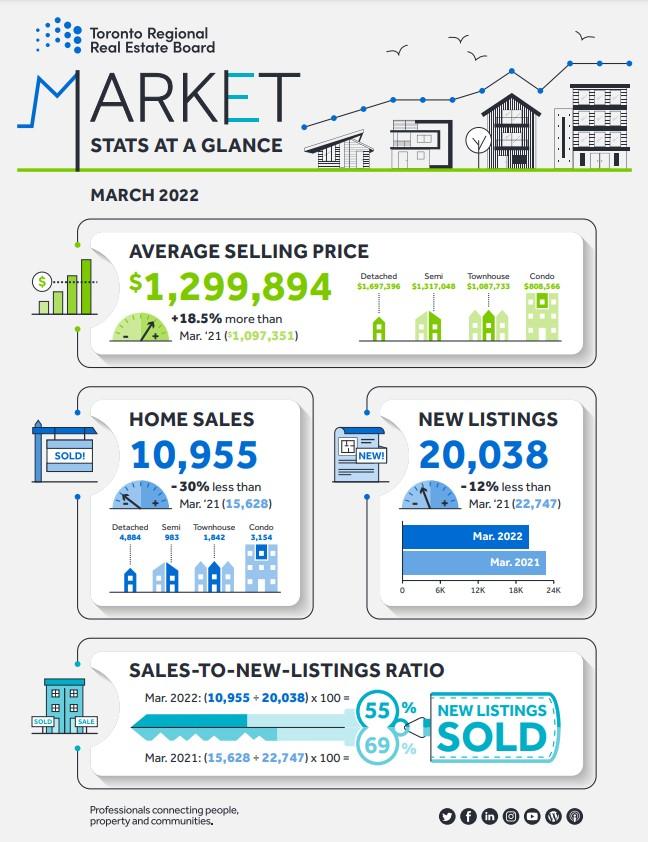 What are the Current Average Home Prices?

The Bank of Canada has raised interest rates by half a percentage point – its biggest single move in more than two decades – and promised more increases to fight soaring inflation that is being driven in part by the war in Ukraine. This has an effect on the interest rate that banks charge the consumers. Subsequently banks have also increased their variable interest rates.

Higher interest rates make loans and mortgages more expensive. Homeowners in the real estate markets of the GTA, will now pay more on their regular mortgage payments. With an increase in interest rate, we will see a drop in approval amounts for buyers which will push buyers of expensive homes into lower priced homes. This is a good thing that could stabilize our housing market.

With more interest increases as indicated by the Bank of Canada, we can further see a softening of our housing market. It is a great news for first time buyers and other home buyers who were from last two years having a very hard time in competing against dozens of other buyers for every home. As more inventory comes into the market, these buyers will have more choices.

The Government of Ontario has announced amendments to the Non-Resident Speculation Tax (NRST).

As of March 30, 2022, the NRST rate will be increased from 15% to 20% and will be expanded to all regions of the province. The NRST will continue to apply to individuals who are not Canadian citizens or permanent residents of Canada or by foreign corporations or taxable trustees. Visit the Government of Ontario’s NRST webpage for details regarding the transition provisions for the tax rate, the international student rebate, and the foreign workers rebate.