On the Move – Light Rapid Transit in Mississauga 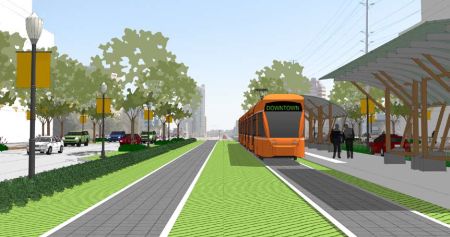 The City of Mississauga’s Hurontario-Main LRT (Light Rail Transit) Project team will update the public on progress, timelines, next steps and provide information on Light Rapid Transit (LRT) systems in cities around the world at a project launch event planned for April 25, 2012.

“In 2010, the City of Mississauga completed the Master Plan for the Hurontario-Main Street Study that involved technical analysis and public consultation that identified Light Rapid Transit (LRT) as the best option for the corridor,” said project manager, Matthew Williams. “With the City of Brampton, we are now undertaking the Preliminary Design and Transit Project Assessment Process to look at requirements for the Light Rapid Transit system and need to consult the public.”

In December 2011, the LRT project entered into the Preliminary Design and Transit Project Assessment Process (TPAP) Phase. Williams explained, “this phase of the project ensures the system can be built the right way, at the right price and refines plans based on design, integration, public input and affordability.”

“We are now underway with the design concepts stage, and will soon be engaging stakeholders and the public to help us achieve a sustainable system, thoughtfully integrated in communities and fostering vibrancy, accessibility and connectivity,” said Williams.

In 2010, the cities of Mississauga and Brampton completed the ‘Hurontario-Main Street Study’ from the lakeshore in Port Credit to downtown Brampton. This city building project was identified as one of the priority projects for Metrolinx in the Greater Toronto and Hamilton Area. The study combined land use and transportation and followed the Municipal Class Environmental Process. An essential part of the process was going out into the communities along the corridor to understand what people needed and wanted for the corridor.

“At the conclusion of the study we listened to the public and technical experts and Light Rapid Transit (LRT)  was selected as the best transit option for the corridor,” said Williams.

The Hurontario-Main Light Rapid Transit  Project open house is on April 25, 2012 from 3 to 8 p.m. at the Mississauga Civic Centre in the Great Hall.