Pigeon in Downtown Mississauga-Passenger pigeons bring the past, present & future of Mississauga in focus

Residents and people visiting Mississauga’s City Centre have a special new treat for their eyes! 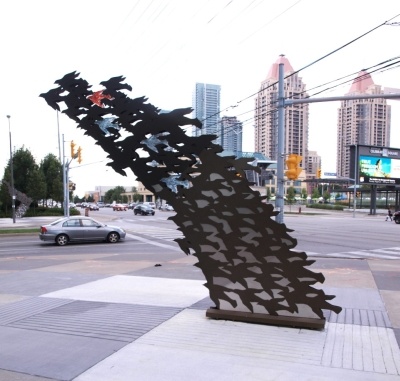 A new art piece entitled ‘Migration’ by a local sculptor Alex Anagnostou was installed this week at the intersection of Duke of York Blvd. and Burnhamthorpe Road, right across Mississauga Celebration Square.

This is a sculpture in two parts made up of steels, sandcast glass and aluminum. The arrow shapes from either side form an arch over the Boulevard on the south side of Burnhamthorpe.

This structure tells the story of migratory passenger pigeons that used to fly across the southern coast of Lake Ontario in huge numbers.

It also references the Mississauga First Nations People who were drawn to this area because of the rich and diverse landscape.

In the present day scenario, the landmark stands for movement, movement of people, movement in economic growth and development and movement in cross-cultural exchange and acceptance.

And as the arrows of the structure converge at the centre, it represents Mississauga as being the culminating point, the centre or hub of all activity, a diverse, vibrant and thriving central point. 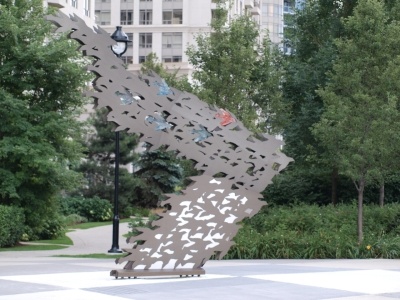 As a Realtor, I feel that the structure stands for unity or completeness that comes from striking a fine balance between people coming in or moving out of Mississauga.

As an environmentalist, my wife also sees the structure as a gentle reminder of the need for striking a fine balance with nature, of taking care of wildlife before they disappear.

If you are wondering how this relates with real estate market in Mississauga, the downtown core of Mississauga or the Square One area is home to a number of sought after condo buildings.

Real estate investing in Mississauga is increasingly becoming popular. In addition to resident and non-residents investing in condos in Mississauga, there is a lot of movement from people migrating from around the world, especially from the Middle East, Europe, South America, China, India and Pakistan.

The newcomers usually start their early life in Mississauga by renting a condo in Mississauga Square One area. Easy access to public transit, library, community centres, shopping and the Sheridan College are just some of the contributing factors.