Cooksville GO station revamp is on the horizon. This will bring solace to the commuters of the busy Cooksville neighbourhood. Metrolinx had put out a Request for Qualifications (RFQ) last year for redesigning and rebuilding Cooksville GO station in Mississauga. With the RFQ process completed, the current stage is seeking Requests for Proposals (RFP) from two pre-qualified companies – Ellisdon and Kenaidan Obayashi to design, build and finance the new Cooksville GO station.

Ultimately, the winning company will be responsible for building certain amenities and structures as requested by Metrolinx, which include:

The Cooksville GO station is a very crucial hub alongside the upcoming Hurontario LRT corridor. The LRT project is slated for completion in 2022. Transit in Mississauga is set to become bigger and better as per Mississauga City’s infrastructure plan to support the growth of the City.

Majority of the residential intensity will be coming to Mississauga in the form of hi rise condo developments. This is but obvious given the lack of available land in Mississauga for low rise single family residential development. There are many builder new condo projects which are either under construction or are in pre-construction stage. The City claims to be in a good position in the coming to be able to meet with the transit needs of a dramatic and simultaneous population increase.

The province of Ontario has dedicated roughly $1.3 billion to building the 22-stop Hurontario LRT. As per Mississauga Mayor Bonnie Crombie this is just a fraction of the billions that will be poured into the corridor to construct future transit, infrastructure and other investments. Mayor Crombie says that the LRT corridor will accommodate more than 100,000 new residents and workers within two decades.

“The LRT is a game-changer,” Mayor Crombie says. “The LRT will be the north-south spine of a regionally integrated rapid transit network. It is truly transformational, and it is already shaping how our city will grow for decades to come.”

Some key Mississauga stops along the upcoming LRT route:

Port Credit GO: The most southern LRT stop will connect with the Lakeshore West GO line and an east-west higher order transit corridor that will be built along the city’s lakeshore.

Cooksville GO: The Cooksville GO LRT stop will connect the LRT with the Milton GO train line. Major developments are planned to energize the Dundas-Hurontario area.

Exchange: The Exchange stop is part of the LRT’s downtown loop, where part of the Square One Mall parking is being turned into city blocks with shops, restaurants and patios.

Eglinton: This stop on the LRT will be the gateway to a mixed commercial-residential area.

Courtneypark: This stop will take workers into one of Mississauga’s key employment & corporate areas. 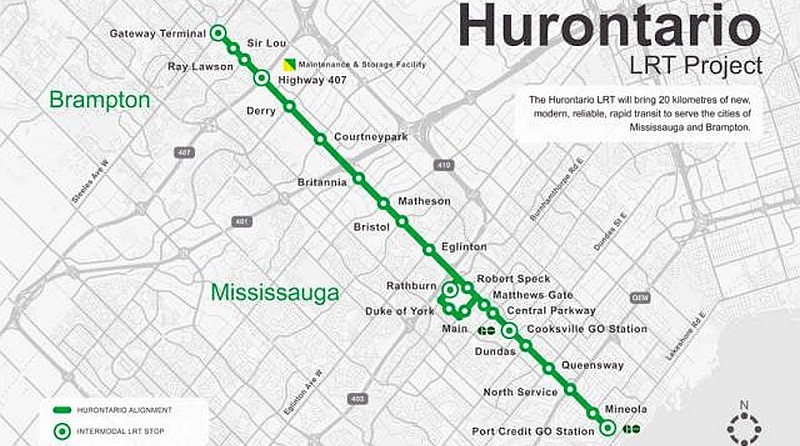